The Defense Department plans to help fund President Donald Trump’s goal of building a wall on the U.S.-Mexican border by transferring $54 million appropriated by Congress in fiscal year 2019 to sustain U.S. nuclear missiles. 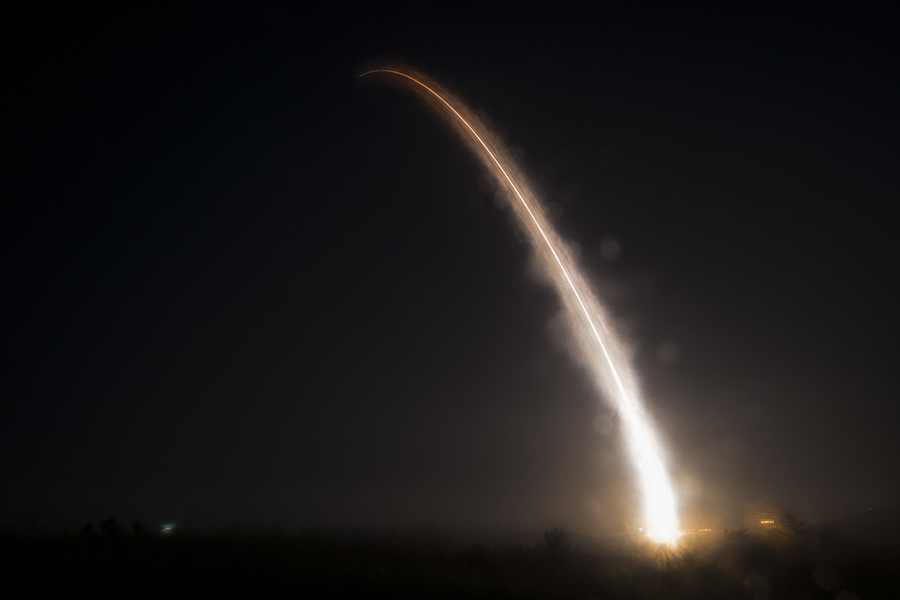 The United States conducts a May 1 test of a Minuteman III ICBM from Vandenberg Air Force Base, Calif. The Pentagon plans to transfer funds from a Minuteman III upgrade program, among other U.S. nuclear weapons activities, to support Trump administration plans to build a wall on the U.S.-Mexican border. (Photo: Aubree Milks/Defense Department)

Although the amount is a fraction of the more than $24 billion Congress appropriated for nuclear forces at the department this year, the funding shift appears to contradict repeated statements from Pentagon officials that nuclear weapons are the Pentagon’s top priority.

The May 9 reprogramming transfers $24.3 million, out of an appropriation of $125 million, from the Minuteman III intercontinental ballistic missile Launch Control Block Upgrade program. A document outlining the details of reprogramming states that funds are available due to a “slip in the production schedule for” the program.

The reprogramming also transfers $29.6 million, out of an appropriation of $47.6 million, for sustaining the nuclear air-launched cruise missile (ALCM). According to the department, money is “available due to contract savings” and “lack of executable requirements.”

The Air Force has initiated programs to replace the Minuteman III and the ALCM with a new fleet of missiles.

In addition to transferring money from the two nuclear missile projects, the Pentagon also intends to shift $251 million from the Chemical Agent and Munitions Destruction program, a long-running effort to destroy the U.S. chemical weapons stockpile. Congress provided the department with $887 million for chemical destruction in fiscal year 2019.

The reprogramming document states that money is “available due to unexpected prior year funding plus current year appropriation that was found to be more than sufficient to cover the…program[’]s funding needs.”

The United States has been destroying its declared arsenal of 28,000 metric tons of chemical agents, second in size to Russia’s, since the 1990s. It has destroyed about 90 percent and is scheduled to complete destruction by 2023. The United States, which has completed destruction of five of its stockpiles, currently operates a chemical weapons destruction facility in Colorado and plans to open one in Kentucky in a few years. (See ACT, November 2017.)

According to the Pentagon, the transfer of funds “does not inhibit the ability to pursue efforts/technologies to accelerate the destruction of the remaining U.S. chemical weapons stockpile.”